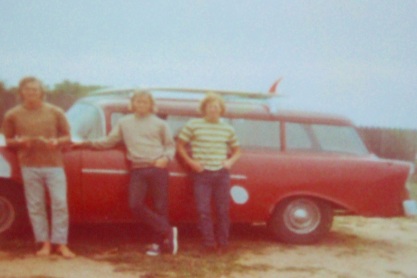 George King, Blake Ostrosser and me on a later trip in my 1956 Bel Air station wagon

Have you ever thought, “If only I’d known this when I was twenty?” or something like that? I did. I was walking to work and wondering if it had really been nearly fifty years ago George King and I were making plans for our trip to Encinitas, CA to go surfing. We were both 18, not doing anything of dire importance, but always had the desire to find a better wave than the one we were currently riding at the moment. 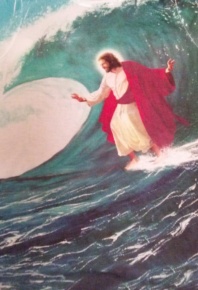 I didn’t expect to find Jesus on my surf trip

George came by my house, we loaded my baggage in his car and my surfboard on the roof of his, I think, 1963 VW bug with an engine that made it go really fast. And that began a journey that a few days later transplanted us in California for our first surf adventure. There would be many more of those that followed that involved other friends to other even more exotic places. The insatiable pull to surf and explore that seemed stronger than the gravity holding me to the ground, led me down a road that eventually brought me into the very presence of God. It took a few years to get there, but that’s what I was doing 50 years ago.

Have I learned anything? Sure. Made mistakes? Gotten lost? Who hasn’t? I suppose that’s what life is all about. The most relevant truth I found in all my meandering around the world has been that Jesus is the way, the truth and the life. His plans for me, and even you, are good and to be diligently sought out, and above all He is a redeemer of mistakes and missed turns on the road to eternal life.

Today, I’m in California again and have been here for almost a year.  Jackie and I have reunited with Youth With A Mission (YWAM), which sounds like a misnomer, but we are in with the youth and doing all we can to see that God’s love is extended as far as we can corporately push with our “Y” brothers and sisters.

Sent out from Christ the King Anglican Church in Saint Augustine, we are YWAM volunteers now living in Chula Vista, which is about 7 miles from the Mexican border where most of the ministry takes place. We build houses down there, about 420 this year. I don’t build them, but we have had the privilege of building two. The rest of our days are spent in the office keeping up with the details of running a multi-million-dollar ministry. Sound like fun? More than I can tell you.

People ask how we do it—live as volunteers (no salary) in California. YWAM knows the challenge of living in this area—it’s quite expensive—so they provide our housing for the $250 monthly staff fees we pay to serve. I have social security, which isn’t much, and we receive donations from a few friends. So far, we’ve met all our financial challenges and only gone into the red (spent more than earned) two months out of the first twelve.  Sometimes I wonder if we need more support, but then I simply laugh at myself because I have to give those kinds of thoughts to God and ask Him. He knows what I’m going to pray before my lips begin to move, so I’m confident He knows my need for “Daily Bread” before the bill comes to our mailbox or the car breaks down (that happened twice, thus the shortage one month).

Our journey begins its second year in YWAM in a couple of weeks, and after that year flies by we have to decide what the next step is. But that isn’t a worry now. We have always found God to be faithful, our lives sprinkled with uncertainty (other than the eternal aspects of life) yet we remain confidently aware that wherever we venture it will be where we are supposed to be. “A man’s heart plans his way, but the Lord directs his steps” (Pr 16:9).

I could take another couple of paragraphs to describe the ministry we are involved in, but I think I’ll give you a link to our website (YWAMs) that will give you so many photos and stories you won’t have time to see them all. And if you are feeling like, “Hey, I will send the Robinsons a bunch of money to keep them above their expenses,” you can do that there, too. God bless!